I’ve been binge-watching The Great British Baking Show at night (okay… I really only make it through one episode per night before kid-induced sleepiness kicks in), but I consider it binge-watching. I love the show so much because A) everybody is so damn nice on it and B) the people are truly amazing bakers.

I’ve never considered myself much of a baker honestly, and watching this show just confirms how much I have to learn if I ever want to really be great at it. If you haven’t watched it, the show is in three parts and the most stressful part, in my opinion, is the second stage: The Technical Challenge!

In this stage the bakers are given a tricky recipe with very bare instructions and expected to make it. One I watched recently featuredÂ Egg Custard Tarts as the technical challenge. They seemed completely up my alley (sweet pastry filled with slightly sweet custard) so I thought I would give them a shot without the stress of a timer and with a slightly more filled out recipe!

I was able to dig up Paul Hollywood’s (one of the judges) original Egg Custard Tart recipe because, well, the Internet, and IÂ tried to follow it just as closely as I possibly could.

Inspired by The Great British Baking Show, I tried my hand at a classic Egg Custard Tart. The results were mostly successful and definitely delicious!

Recipe followed as closely as possible from Paul Hollywood's Recipe.

This is one of those baking recipes that really shows your attention to detail I think (mine sucks, frankly). There aren’t many ingredients but each step requires some finesse.

I think you could use almond flour for the recipe, but it did specifically call for ground almonds so in my small food processor some almonds went!

I mixed it up with some flour and everything was going just swell!

Then I mixed in cold butter which was just like making any pie crust. No biggie! Oddly, the recipe said to mix in the sugar after you do the butter. Typically, I would’ve thought to mix it in before, but I stuck with it.

The sweet pastry dough ended up being nice and soft after I mixed in the egg. If definitely something you want to work with your hands so it stays soft. You wouldn’t want to do this in a stand mixer, in my opinion. Plus, you want to work it as little as possible.

That gets shaped into a disc, wrapped, and chilled for about 30 minutes.

Onto the custard! This part I felt like I had a good handle on. Egg yolks and sugar whisked together.

Then you pour in warm whole milk and whisk until it forms a froth. I got a little bit worried about how thin the mixture is, but have no fear. It’ll set up beautifully in the tarts.

Okay, when it came to making the actual tarts is when I hit some glitches. For starters, I didn’t have the right size cutter so I had to freeform the rounds. I just used a ruler to mark off 4 1/2 inches in diameter and cut it out. It worked, but was far from perfect.

I shaped these into my muffin tins. I think the next time I would raise them up a tiny bit more as I basically just made them level with the tins.

Then pour in the custard! A steady hand helps when transferring to the oven or you can pour the custard into the tart shells after you place the muffin tin in the oven.

Sprinkle with nutmeg and bake these guys for 25 minutes at 400 degrees F. If they start to look too toasty around the edges, turn the heat down to 350 for the last 10 minutes (mine did).

The custards should dome a bit and have just a little wiggle to them. 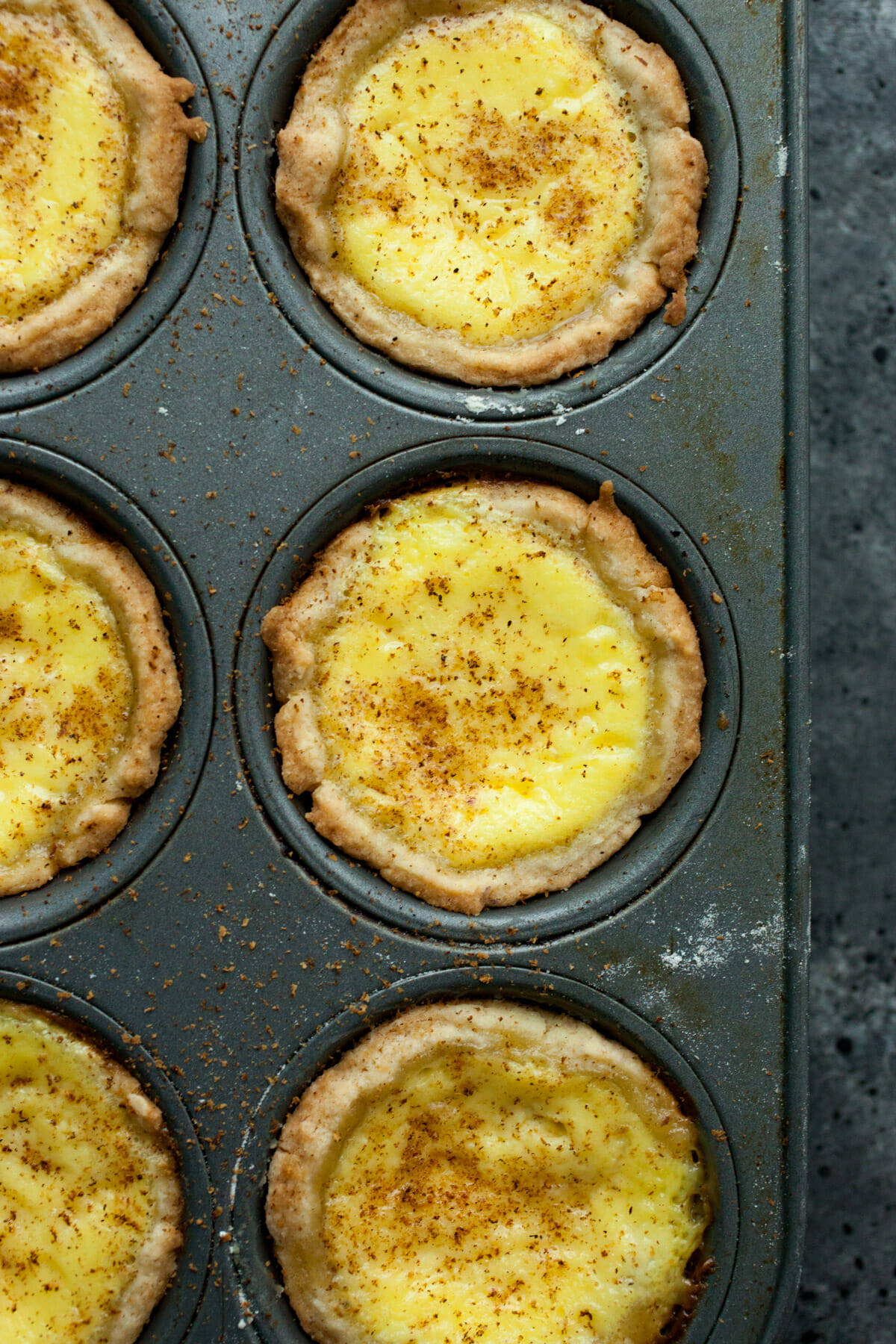 The thing I failed to do was rotate my muffin tin halfway through baking. I think this led to slightly uneven baking. SIGH.

Six of my tarts were perfect. Well, perfect enough for me.

Three of my tarts were slightly underbaked and stuck a bit to the muffin tin. I was able to get them out though in one piece and they were edible.

I think they could’ve used an extra minute in the oven maybe or just a rotation of the pan.

The six that were good though had a nice bake on them! The custard didn’t seem overcooked to me and the tart shell was nice and crispy all around. 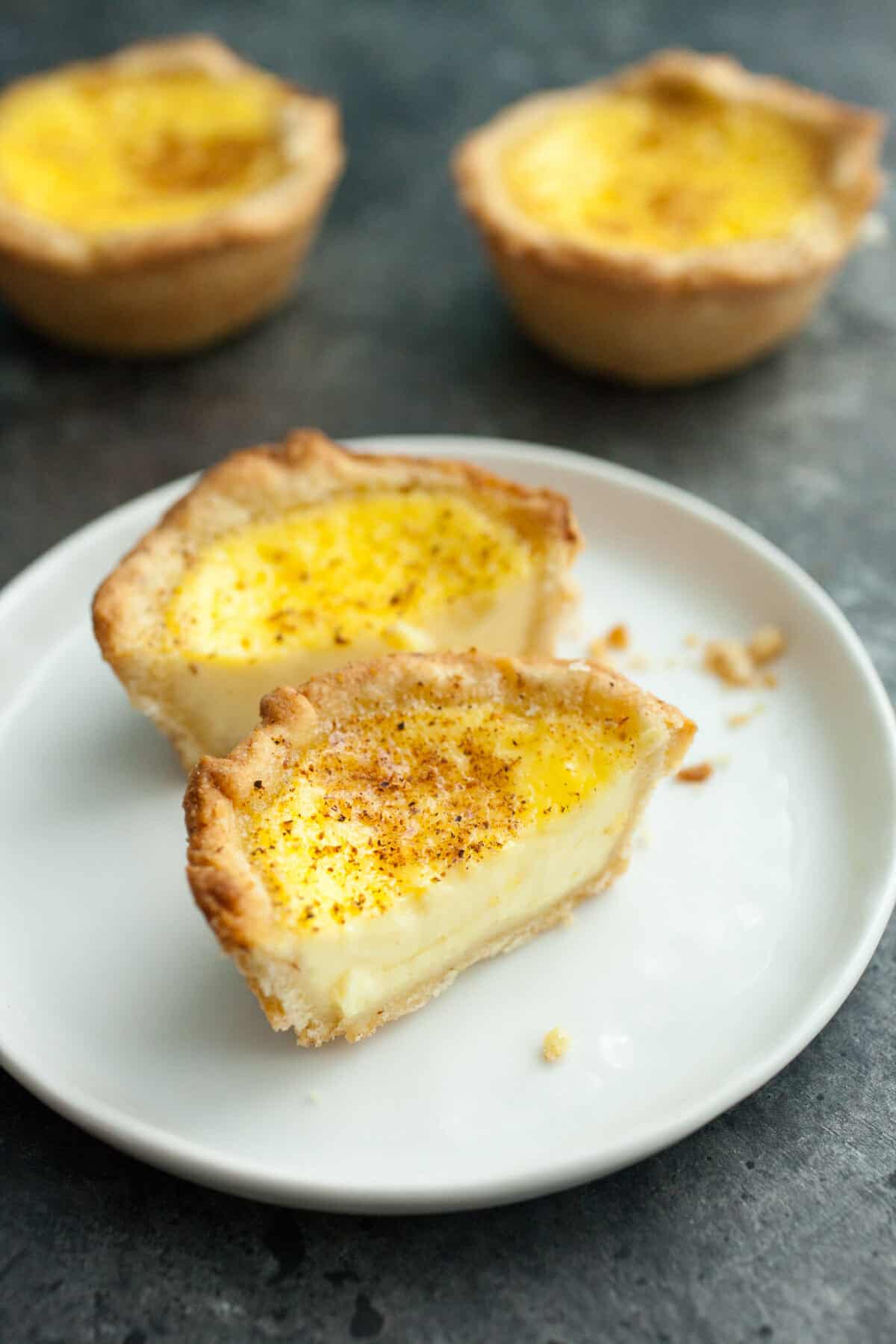 This was really fun and I feel like I could nail them if I made them a second time. My family scarfed all of them down in twoÂ days. NO JOKE.

Baking is fun, but baking competitively would beÂ incredibly hard.

Next Post
How To Make Authentic British Clotted Cream