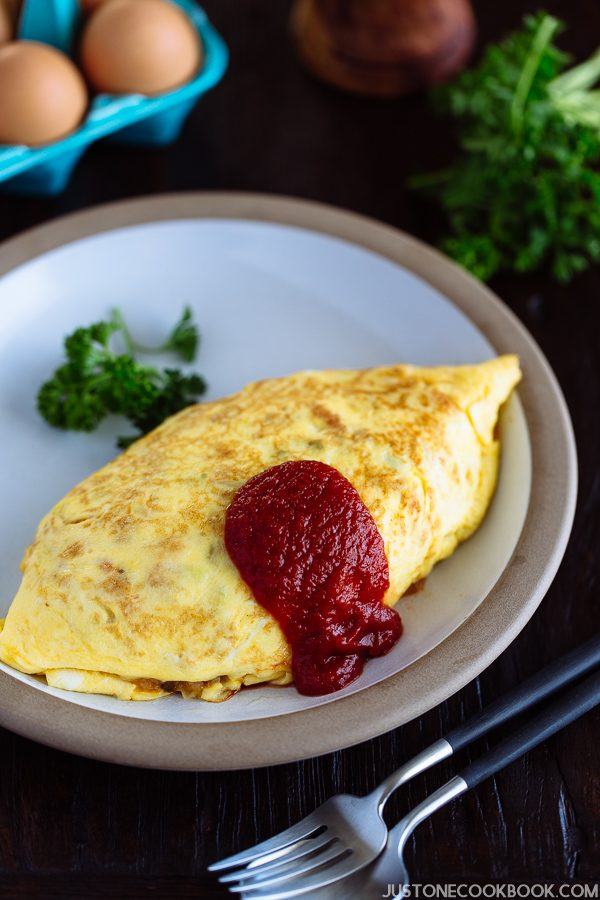 Fried rice flavored with the beloved American condiment ketchup and encased in a golden omelette pillow, Omurice (ã‚ªãƒ ãƒ©ã‚¤ã‚¹) or Omelette RiceÂ may not be your typical choice when you visit your local Japanese restaurants. It’s easy to mistake the dish as a fairly recent fusion invention of modern Japanese cuisine.

However, this humble dish has been a popularÂ yoshoku (western-style Japanese food) for over a century. That’s right! It isÂ a Japanese rendition of â€˜mash upâ€™ comfort food at its best. It’s got grain, vegetables, proteins and a big bright sunny disposition, enough to make aÂ fried rice fiend wake up hungry.

This delicious omurice was featured on the popular Japanese TV drama called “Shinya Shokudo (æ·±å¤œé£Ÿå ‚)” or “Midnight Diner: Tokyo Stories”Â which is available on Netflix.

Midnight DinerÂ features dishes that are more representative of Japanese home cooked recipes that you might not have seen in your local Japanese restaurants. Â “Omelette Rice” episode is Season 1, Episode 4Â on Netflix. 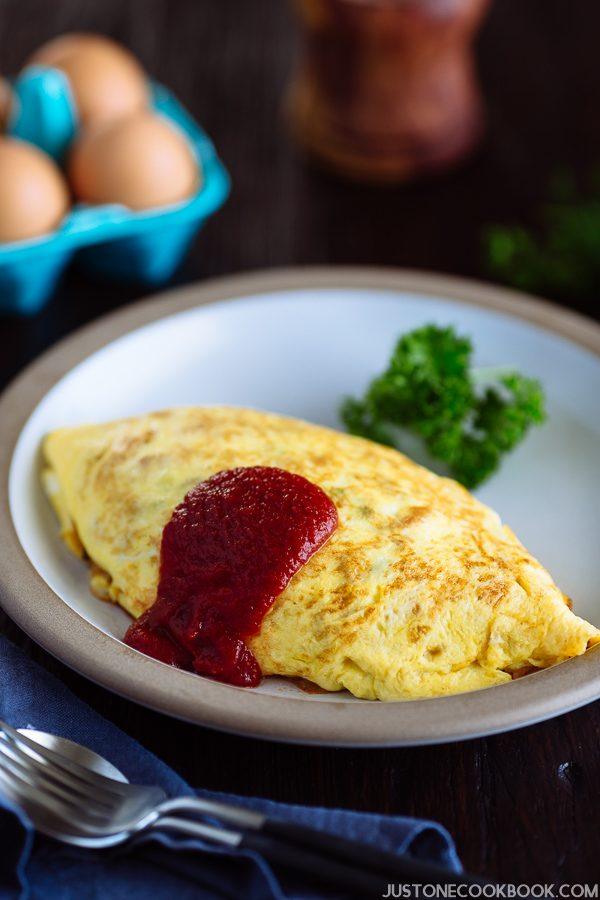 OmuriceÂ (ã‚ªãƒ ãƒ©ã‚¤ã‚¹) is a loanword from bothÂ OmeletteÂ (omuretsu, ã‚ªãƒ ãƒ¬ãƒ„) andÂ RiceÂ (raisu, ãƒ©ã‚¤ã‚¹). In this recipe, fried rice is seasoned with sweet and sour flavor of ketchup and tomato puree, and tucked inside a thin blanket of golden fluffy omelette. It’s sweet and savory, the whole ensemble of omurice is just so comforting to many Japanese people that it is considered one of the most popularÂ yoshoku (western-style Japanese food).

Yoshoku started to appear around the Meiji Era (1868â€“1912) afterÂ JapanÂ ended its isolationist foreign policy and opened the ports to the West. Tonkatsu, Korokke,Â Hambagu, Curry Rice, DoriaÂ (rice gratin), Cabbage Roll, Spaghetti Napolitan and Omurice are just some of the familiar dishes in the category. They have katakana names to emphasize their foreignness, using the word “raisu” (ãƒ©ã‚¤ã‚¹, rice) instead of “gohan” (ã”é£¯, rice) for example. Another easy way to tell these dishes apart? They are often served with fork, knife, and spoons, instead of chopsticks.

At the time, foreign ingredients were difficult to find in Japan so people made yoshoku using local ingredients. Â Even though the dishes may look like western dishes, the taste is still distinctly Japanese. I think that has unintentionally made yoshoku dishes uniquely Japanese.

You may have noticed the abundant use of ketchup in western style Japanese dishes. Brought in by the American army who came to Japan after World War II, ketchup was used in dishes to replace tomato sauce which was not easily accessible then. Since it is convenient and tasty, ketchup continues to become the mainstay in the Japanese kitchen pantry. 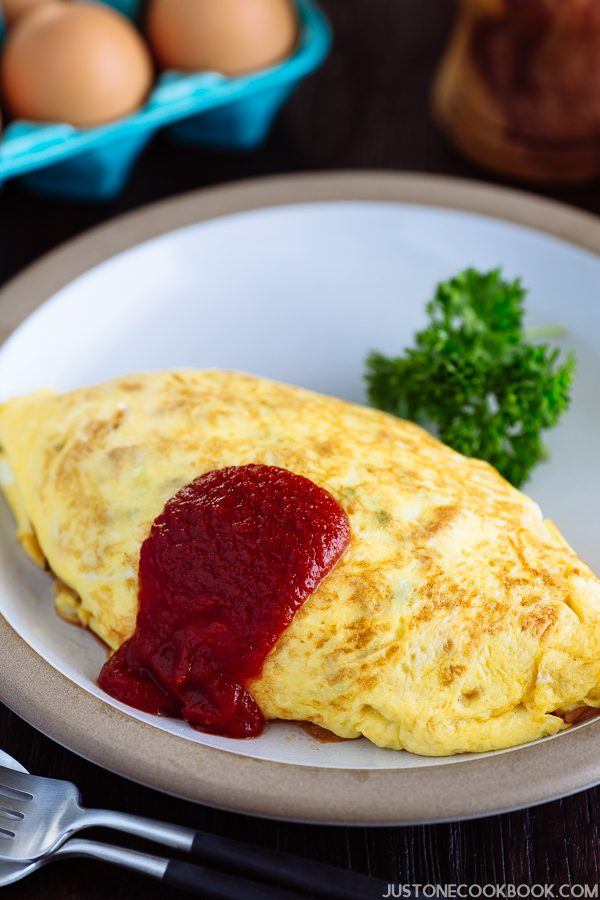 There are 2 strong theories on omurice’s origin.

Theory 1: When the owner at a yoshoku restaurant Hokkyokusei (åŒ—æ¥µæ˜Ÿ) in Osaka learned about a regular customer who wasn’t feeling well, he quickly cooked up a simple fried rice with mushrooms and onion seasoned with ketchup, and carefully wrapped with omelette to serve the customer so he would regain his stamina. The customer loved it so much that he asked for the menu name. The sharp-witted owner came up with the name “omurice”. Â This omurice is much closer to what omurice is now.

Theory 2:Â Simple fried rice with egg, onion, minced meat was served as a meal for workers atÂ Renga-teiÂ (ç…‰ç“¦äº­) in Tokyo. Â Other customers were drawn by the vibrant egg fried rice that they started requesting for it, and that’s how omurice became an official restaurant menu.

Whichever story you prefer, I think it all started with omurice’s ability of hitting the right spot, especially when you crave for comfort food. 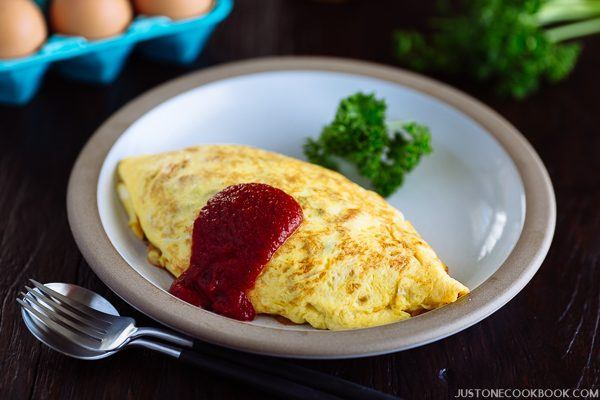 In general there are two ways to make Omurice. Â The original one called Ganso Omurice (å…ƒç¥–ã‚ªãƒ ãƒ©ã‚¤ã‚¹) is to wrap the fried rice with a thin omelette, like the one I shared today. Â Some people prefer light yellow omelette (no burn spot), but I personally prefer my omurice to have slightly golden color (which adds flavor) and the omelette is still creamy soft on the inside.

The second style of omurice is called Fuwatoro Omurice (ãµã‚ã¨ã‚ã‚ªãƒ ãƒ©ã‚¤ã‚¹). Â First, you make ketchup fried rice and transfer to the plate. Â Then you make the omelette, and while it’s fluffy (fuwa) and runny (toro), place it on top of the ketchup fried rice. Â Before serving, you slice the center of omelette and runny egg yolk to cover the fried rice. Â You might have seen this style of omurice in the movie Tanpopo. Â Hence, it’s also calledÂ Tanpopo Omurice (ã‚¿ãƒ³ãƒãƒã‚ªãƒ ãƒ©ã‚¤ã‚¹).

Which one is your favorite style? 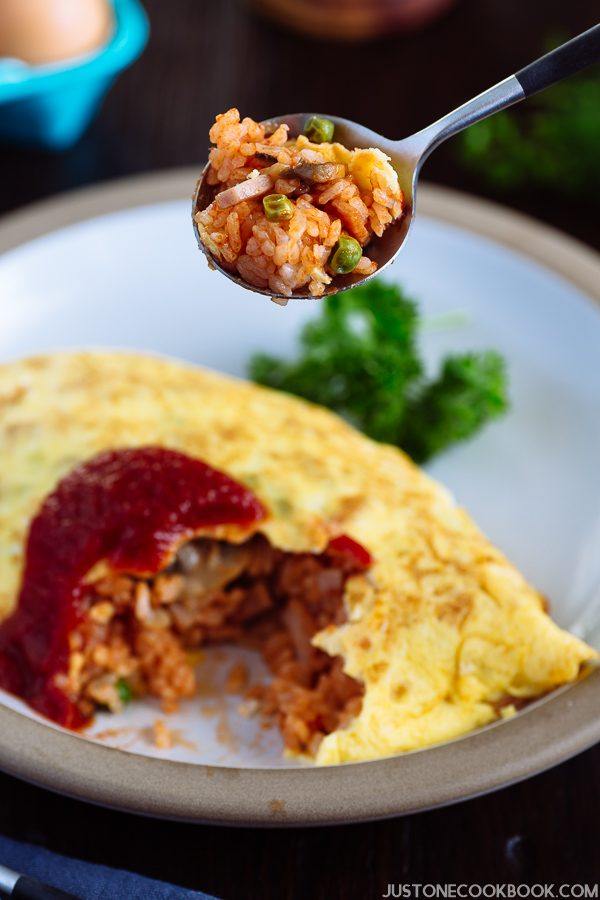 Here is the list of omurice variations that I have seen or think of. Â As you can see, the possibility is endless. Feel free to take the liberties to use whatever ingredients you have in the fridge and make your own version. Creativity is welcome when comes to making omurice!

Filling or Additions on top of Omurice 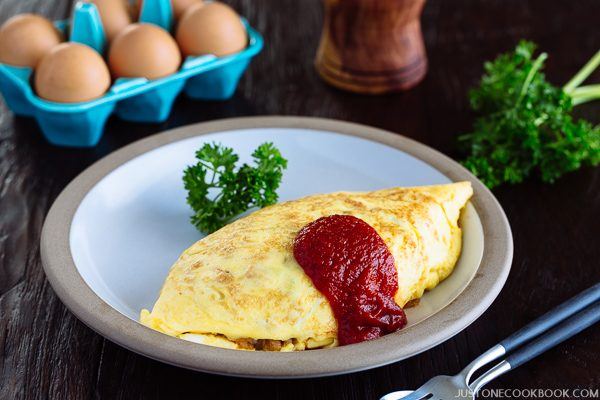 The cooking method for omurice is really quite simple. It’s a perfect quick one-dish meal for busy moms, college students, and singles as you can whip it up in a short time. Â Trust me, nothing beats a good fried rice with fluffy egg. I hope you enjoy making omurice at home!

Donâ€™t want to miss a recipe? Sign up for theÂ FREE Just One Cookbook newsletterdelivered to your inbox! And stay in touch with me onÂ Facebook,Â Google+,Â Pinterest, andÂ InstagramÂ for all the latest updates. 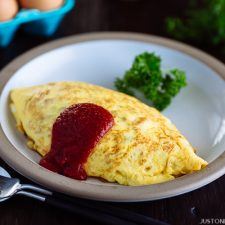 Make the fried rice:
Make the omelette & put it together (Makes 2 Omurice):

Recipe by Namiko Chen ofÂ Just One Cookbook. All images and content on this site are copyright protected. Please do not use my images without my permission. If youâ€™d like to share this recipe on your site, please re-write the recipe in your own words and link to this post as the original source. Thank you.