by Margaret Wilson
My kitchen sees a lot of activity during the week, especially on Sundays when there’s something special bubbling over the fire or baking in the oven. Mostly it is the day’s lunch menu. In preparation of this day we try to keep our Saturdays simple – mostly with leftover food making its appearance on the dinner table. While we do have two days a week that are kept aside for this purpose, Saturdays are usually those when a really simple meal is eaten for lunch at least. 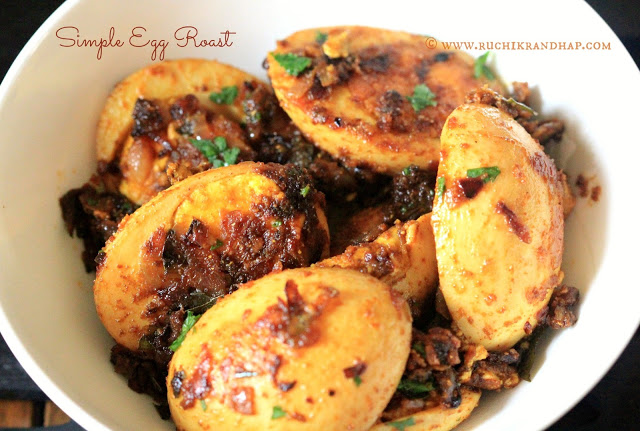 I have been longing to make a simple egg side dish for ages. Especially the egg roast because I have very fond memories of eating a particularly delicious egg roast side dish at a small eatery across the college premises when I was doing my M.B.A at Mangalore University, Konaje. There were two very simple households that served afternoon meals to the students to make their two ends meet. One was Gulabi akka who made some mean fried sardines that we would relish with some piping hot boiled rice and curry. She was rather poor and had just a couple of benches that would seat a few students for a meal, so most of us would throng the house of her neighbour who had a slightly bigger setup. A few more long benches and tables that were happy to cram a handful of students for lunch. 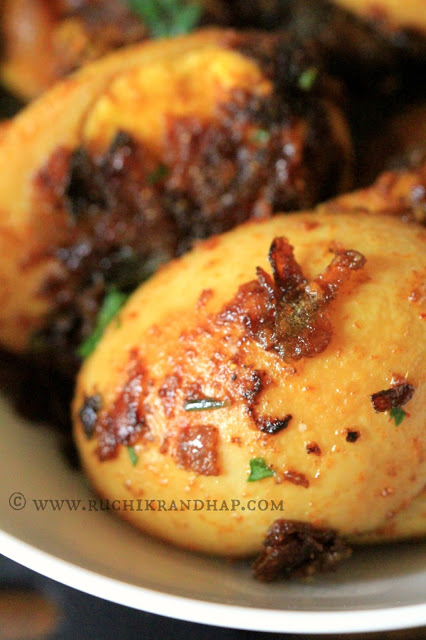 The meals were mostly vegetarian with boiled red rice, a vegetable curry, a greens or legume side dish, pickle and papad featuring on a thali accompanied by a nice steel tumbler of cool buttermilk.Â On days when the hard core non-vegetarian in me used to get stifled by the display of pure veg food I would order the egg roast. A beautifully browned whole hard boiled egg in an awesome thick masala served in a small steel bowl would satiate my senses. Sometimes two of us would share one egg and many a times a few of us who reached during closing time would fight over the last few eggs. Unlike Gulabiakka this family did not prepare fish, so the egg roast was a blessing for those who fainted at the sight of a pure veg meal. Those were the best meals of my life – simple, delicious and satisfying. What’s more, they were budget meals.
Since then I have tried high and low to find a recipe that would help me revive those memories. I have tried to recreate the taste in this recipe, this is the closest I could get! 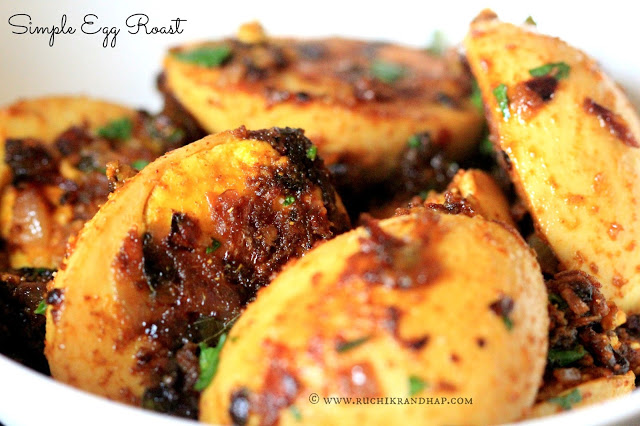 About this dish
This is dead simple recipe, nothing fancy at all. Perfect for bachelors and those who have little time on their hands to cook something decent, tasty and nutritious on a busy day. If you require more masala I suggest you increase the number of onions and adjust the spice accordingly as fried/browned onions tend to taste sweet. You may add a chopped tomato instead of lime juice – this will give you extra masala but the end result will be totally different – nothing close to what I wanted to achieve, but go ahead and get experimental!
Click the image below to save this recipe on Pinterest! 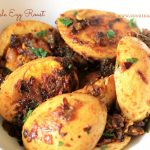 Super simple egg roast recipe that can be tried by novice cooks too!

1. Since I used Kashmiri chilly powder I also added pepper powder to the marinade. If you are using a spicy variety of chilly powder, you can reduce the quantity according to taste and/or skip the pepper powder. You may even use Bafat masala powder instead of red chilly powder. 2. You may use 1 medium sized tomato instead of lime juice - it will help you get some extra masala, however the overall taste will change. Instead add an extra onion and adjust the spices as fried/browned onions tend to taste sweetish.