Did you know dandelions are more than a weed in your yard? It has health benefits to you and can be used to make jelly and wine for your enjoyment.

You can also eat dandelions. There are many great purposes for this treasure hiding in plain sight.

However, I must warn you. Dandelions pack serious benefits which if mixed with the wrong medical condition could be potentially dangerous.Â Please consult your doctor before trying anything dandelion related. Weâ€™re not medical professionals.

With this being understood, letâ€™s move and explore how you can use each part of the dandelion to make dandelion tea: 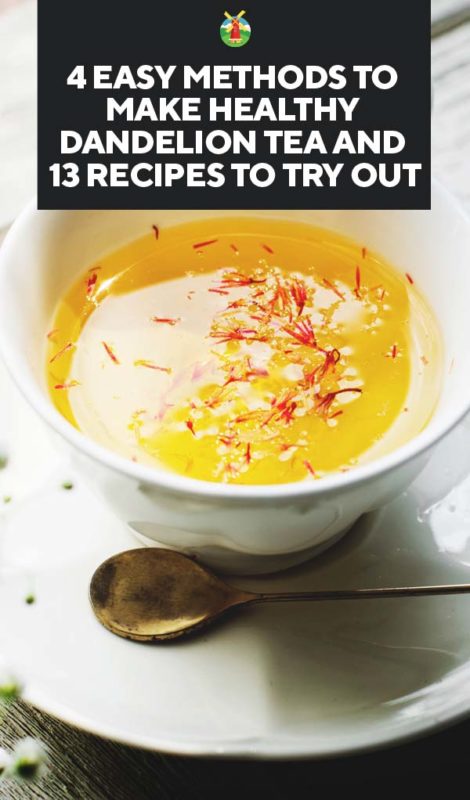 If choosing to make dandelion tea from fresh dandelions, only select dandelions you know havenâ€™t been exposed to pesticides. When in doubt, donâ€™t use the dandelions.

How to Make Dandelion Tea from the Flowers

Youâ€™ll begin by boiling water in a saucepan. Only boil enough water to fill your teacup.

While the water is boiling, pick ten heads (flowers) from dandelions per cup of tea youâ€™re preparing. Remove the green section underneath the flower.

You will be left with the yellow petals. Place theseÂ petals in a tea ball and put inside your teacup. Add the boiling water to the cup and allow the petals to steep inside the cup for 20 minutes.

When the steeping process is finished, add your desired sweetener to the tea and enjoy.

How to Make Dandelion Tea from the Leaves

Some people prefer to deep fry the flowers and use the leaves for their tea. Be sure to use leaves which are younger and still delicate.

When youâ€™ve picked your dandelions and separated the leaves from the rest of the dandelion, wash and dry them.

At the same time, begin boiling your water in the saucepan. You need only enough water to fill your teacup.

Youâ€™ll need approximately six leaves per cup of dandelion tea youâ€™re preparing. When the leaves are dry, chop them finely.

Place the dandelion leaves in the teacup and cover with boiling water. Allow the leaves to steep for ten minutes.

When the leaves have finished steeping, you can either leave them in your tea or strain them out. Add your desired sweetener, and youâ€™re ready to enjoy dandelion tea.

How to Make Dandelion Tea from Fresh Root

Dandelion root is becoming all the rage these days because of the health benefits it offers.

Not to mention, most of us have dandelions growing in our yard which makes dandelion root not only healthy but free.

When deciding to use dandelion root found in your yard, youâ€™ll begin by digging up the entire dandelion plant. Youâ€™ll need to use your garden tools to ensure you get it all because youâ€™re looking for the taproot.

After the plant has been dug up, separate the taproot from the rest of the plant. Be sure to rinse the root in cold water thoroughly.

While the tap root is drying, begin boiling one quart of water in your saucepan. Pat the taproot dry and chop the root into chunks.

Youâ€™ll need two teaspoons of dandelion tap root per quart of water. When youâ€™ve measured the right amount, add the choppedÂ root to the pot of boiling water.

When the root has been added, cover the pot, and reduce the heat. This should decrease the water from a rolling boil and give the root time to steep.

Allow the steeping process to take place on the burner for approximately one minute.

When the minute has passed, remove the pot from the stove and allow the dandelion root to continue steeping for another 40 minutes.

After the 40 minutes is up, strain the root from the water and discard it. Pour the remaining liquid into your cup and add your desired sweetener.

How to Make Dandelion Tea from Dried Root

Some enjoy dandelion tea and the benefits they receive from drinking it. However, they donâ€™t have the time to dig dandelions from their yard.

Not to mention, dandelions donâ€™t grow year-round in most places, making it difficult to enjoy this tea all year.

That was until people discovered how to dry their dandelion roots, or they began purchasing it.

If youâ€™re using dried dandelion root, hereâ€™s how you make tea from it:

Begin by boiling one quart of water. While the water is boiling, chop the dried dandelion root into chunks.

Add the chopped dried dandelion root to the water and allow it to continue boiling in the water for ten minutes.

When the boiling process is finished, strain the root from the liquid, and discard it. Pour the liquid into your teacup and add the desired sweetener to your tea for your enjoyment.

Other Recipes for Dandelion Tea

What Iâ€™ve given you above is basic recipes for using each part of the dandelion to create a tea. However, other interesting methods haveÂ given dandelion tea a little twist. Here are a few more dandelion tea recipes: 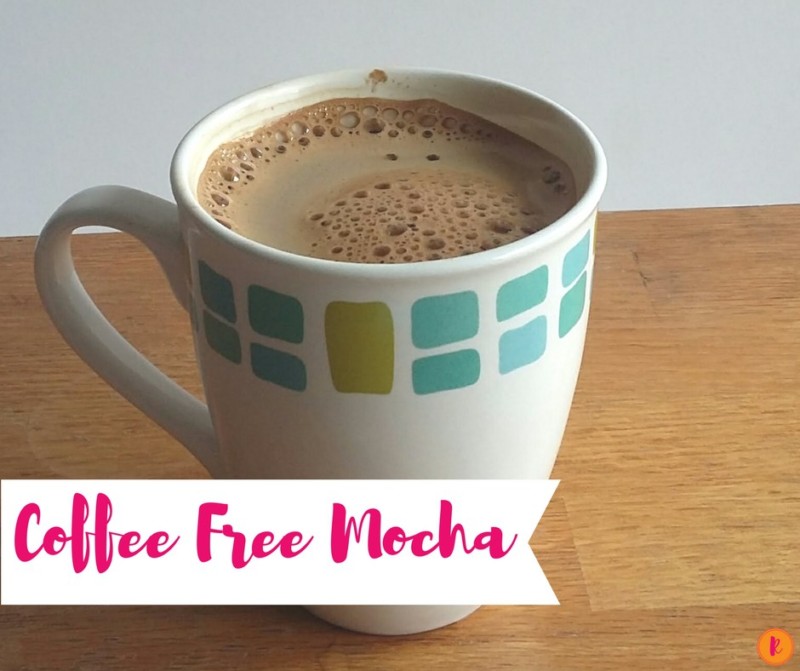 Do you enjoy your mocha coffee but are trying to lead a healthier lifestyle? Youâ€™ll love this recipe. It includes dandelion tea and chocolate.

What a healthy and delicious combination. The next time youâ€™re craving an unhealthy chocolate drink, reach for this recipe. 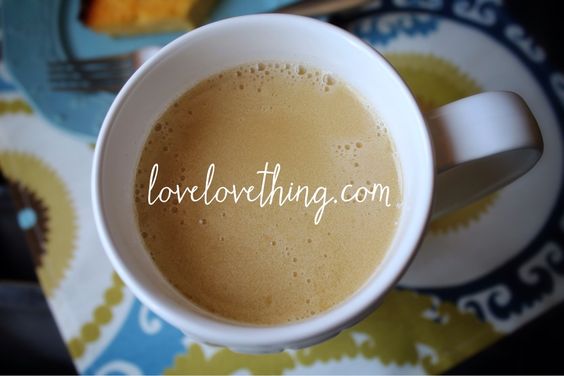 This butterscotch drink is detox tea with butter, coconut oil, and vanilla. If youâ€™re familiar with bulletproof coffee, this is a similar idea only using dandelion tea in the place of coffee.

What I love about this recipe is you donâ€™t have to rush to the store to buy coffee. Instead, pick the dandelions from the front yard and use your pantry staples to create a great beverage. 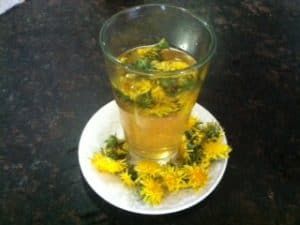 Are you someone who prefers iced tea to hot tea? You havenâ€™t been left out of this equation. This recipe not only gives you dandelion iced tea, but they add lime juice for a boost in flavor too.

It might be a good option, to begin with, if youâ€™re concerned about the flavor of the dandelion tea. The lime juice might make it more palatable. 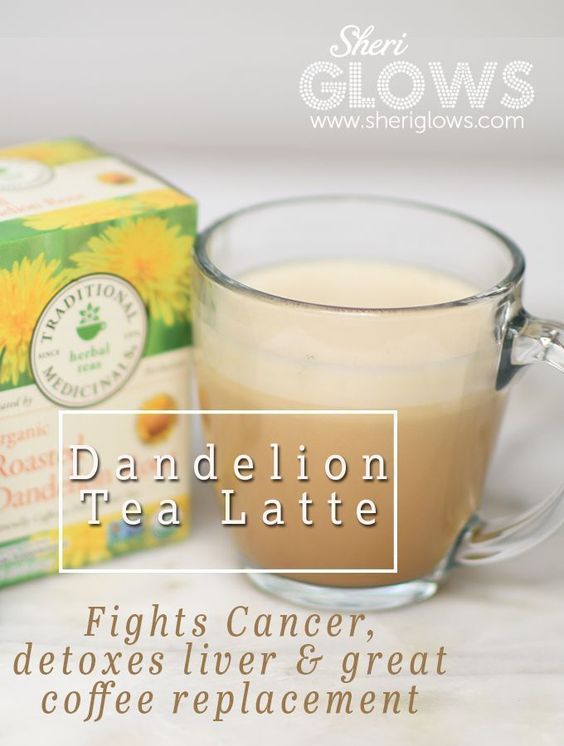 Lattes sound great, donâ€™t they? But they donâ€™t line up with a healthy lifestyle in most cases. However, this recipe creates a delicious latte out of dandelion tea.

Dandelion tea is said to be an excellent substitute for most coffee drinks. Give this drink a try and see what your opinion of it is. 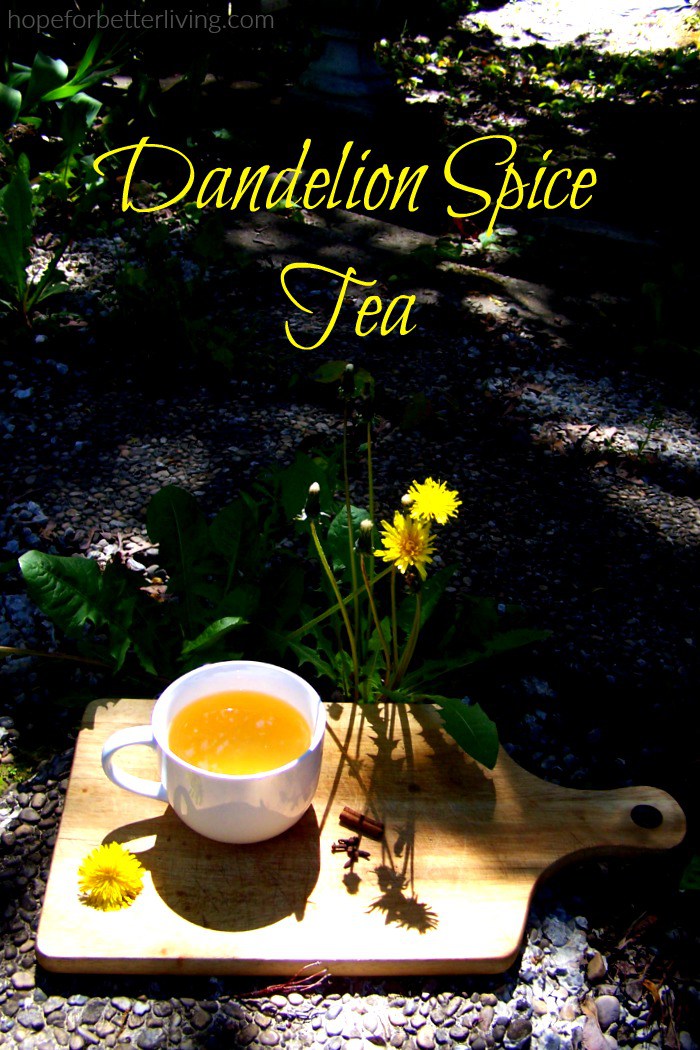 This dandelion tea recipe is similar to what has been shared in the above tutorial. Only,Â they add a little kick to it with the added ingredients of cinnamon and clover.

If youâ€™re a person who loves spice and is slightly concerned about the flavors of dandelions, give this recipe a try. You might fancy it.

6. Three Recipes in One 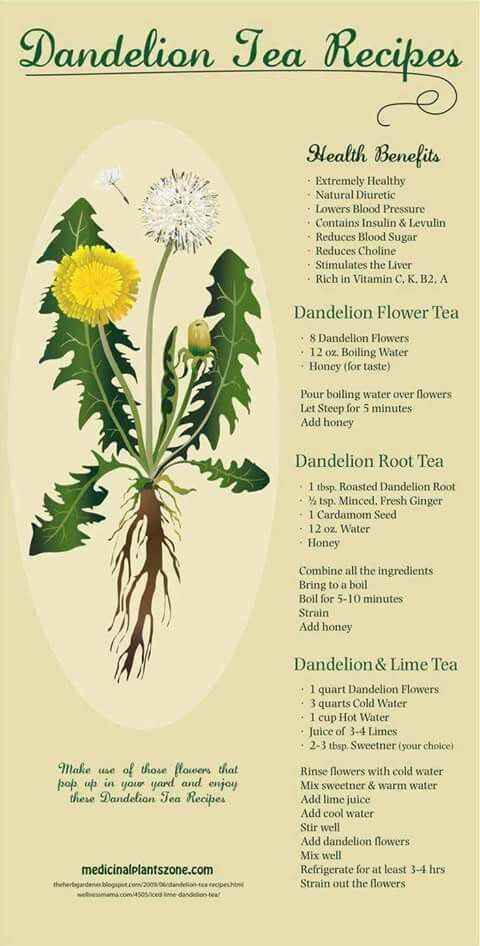 This graphic gives you three recipes in one. Thereâ€™s a recipe for dandelion flower tea, dandelion root tea, and dandelion lime tea.

Theyâ€™re all different from anything previously presented because the recipes add different spices for added flavor. Give it a go and see which is your favorite. 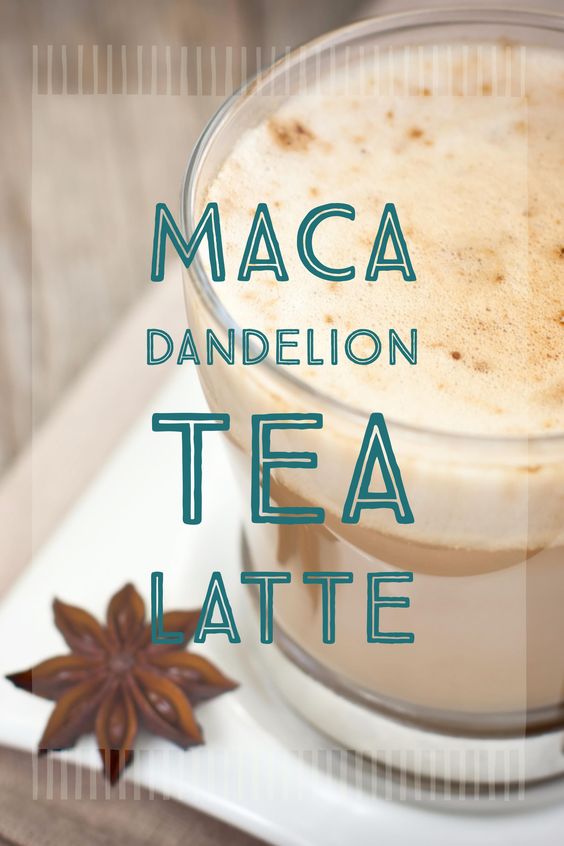 Maca root is another great root with a lot of health benefits. This recipe combines it with dandelion root in one amazing drink.

The recipe also calls for pure coconut oil for added flavor and more nutrients. What a delicious way to get your daily vitamins and nutrients. 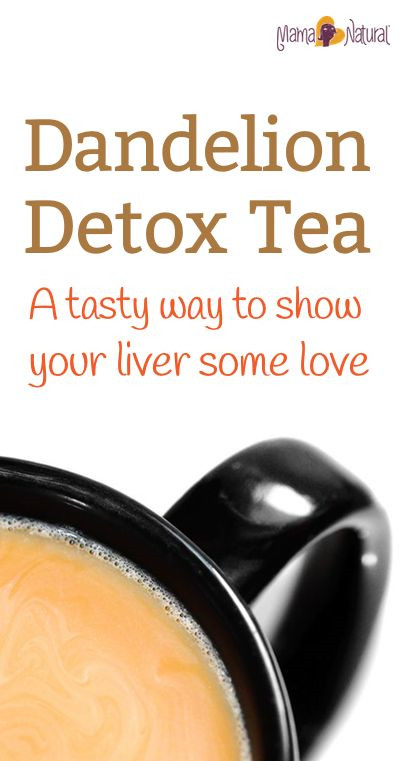 This recipe for dandelion tea is meant to have added detox benefits. They add gelatin or collagen to the recipe along with coconut milk.

Itâ€™s a healthy yet tasty way to rid your body of toxins. If youâ€™re concerned about toxins building up in your body, give it a try. 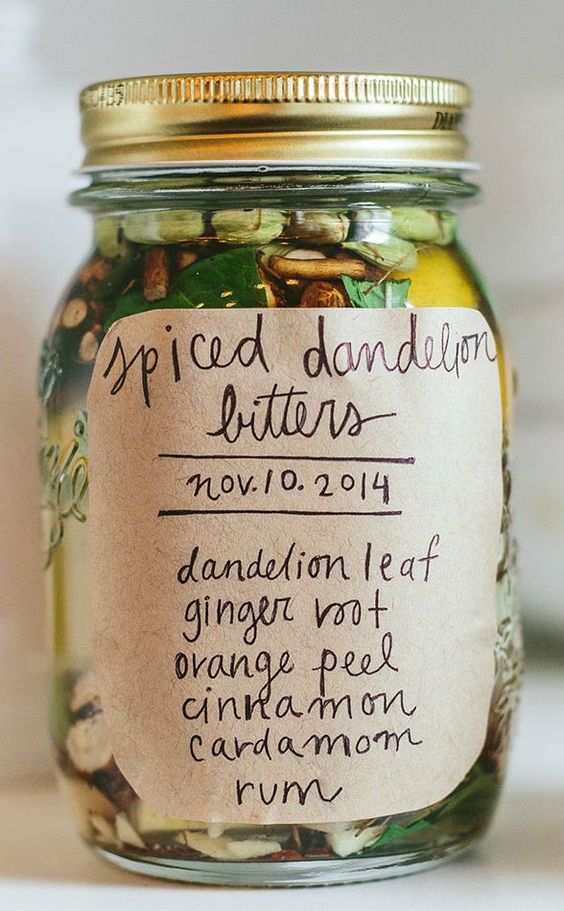 When making dandelion root tea from a fresh source, itâ€™s common to have some dandelions left over. Instead of wasting them, follow this recipe to create tasty dandelion bitters which are great for helping your digestive system.

Dandelion bitters are helpful to keep on hand when you know youâ€™ll be eating larger meals. It helps to keep you from becoming uncomfortably full. 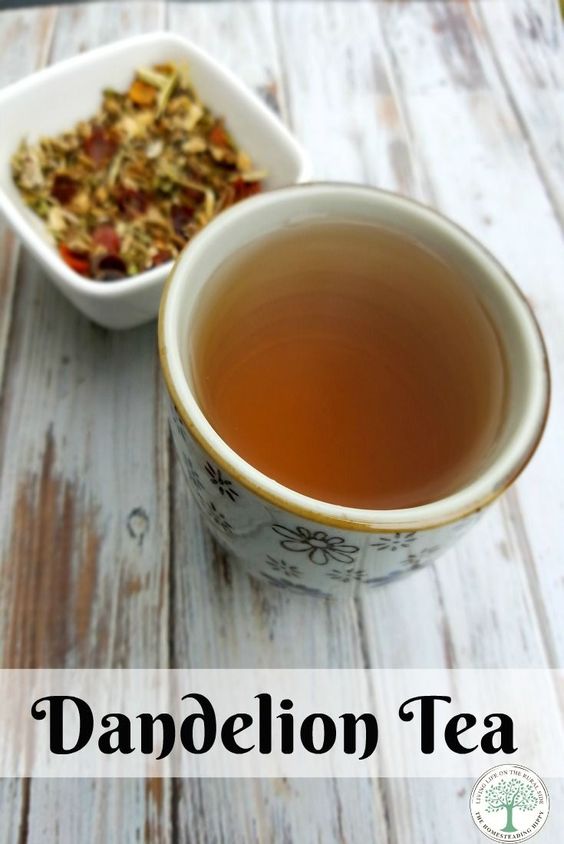 This recipe walks you through the process of foraging for dandelions and share with you a delicious way to make dandelion tea. It includes other fresh herbs such as peppermint, rose hips, nettle leaf, and more.

If youâ€™re looking for a way to incorporate more herbs from your garden into your daily lifestyle, this could be a great way to accomplish this.

11. The Longer Method for Dandelion Tea 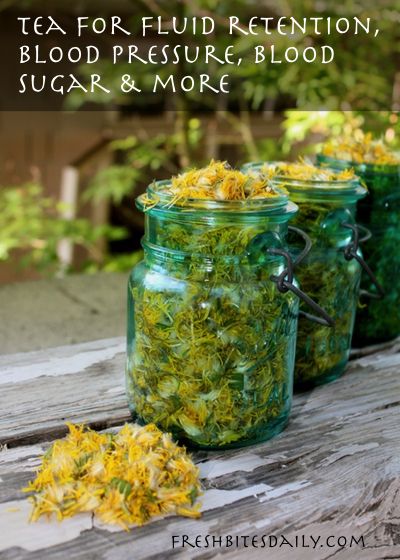 This method for creating dandelion tea takes longer but will certainly give you the dandelion flavor. You allow the dandelions to steep in water overnight, though it may be necessary to dilute the tea more in the morning because of how strong the flavor can get.

If you enjoy the flavor of dandelions and would like more of it, this method could be precisely what youâ€™ve been looking for. 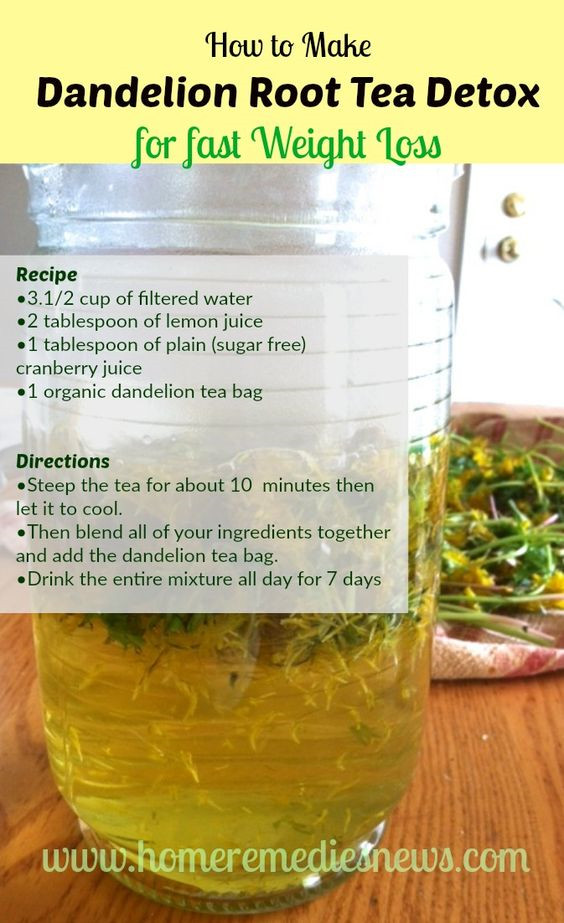 This graphic is another option for creating dandelion tea. The goal of this particular recipe is to help you lose weight.

The recipe calls for dandelion root, lemon juice, and cranberry juice. All of these are wonderful diuretics and should help you shed water weight quickly. 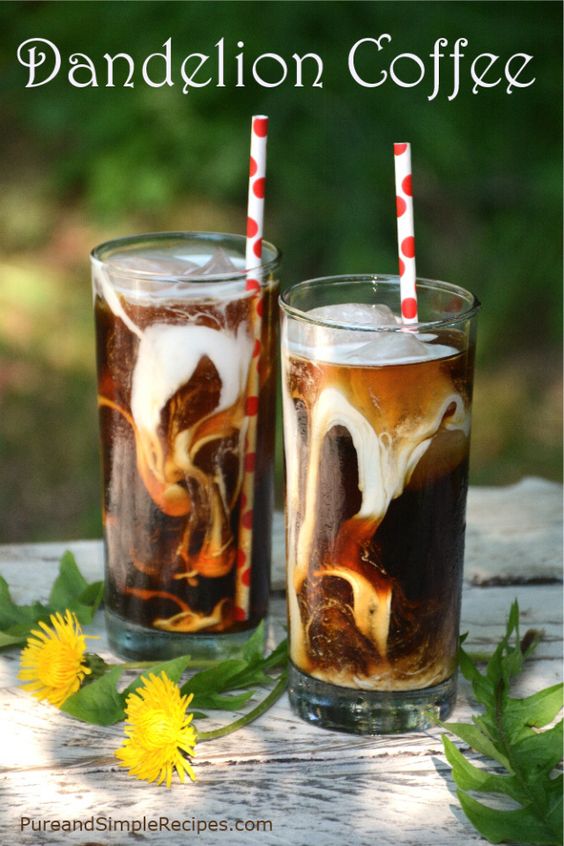 Itâ€™s difficult to give up the sweet beverages we enjoy when embracing healthier food choices. Dandelion iced coffee is a delicious way to get extra nutrients while feeling like youâ€™re indulging.

Plus, weâ€™ve given you 13 different recipes if youâ€™d like to expand the flavor profile of this tea as well. Remember to speak with your doctor before trying any new recipes, but when youâ€™re cleared, we hope you enjoy this as a new favorite beverage.