Fireweed tea or Ivan Chai is a traditional fermented black tea, or tisane, made from fireweed or willow herb, a medicinal herb that grows throughout the northern hemisphere and from California to Alaska in the west, and as far south as North Carolina in  eastern North America. 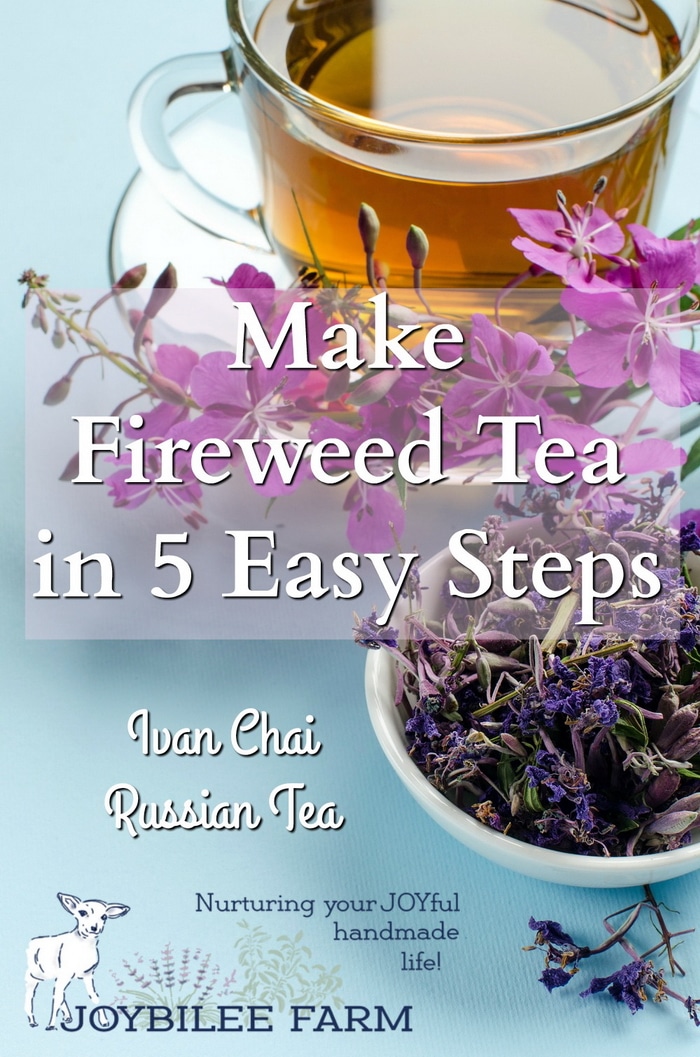 While legend has it that tea was discovered in China and many histories have been written, black tea didnâ€™t appear in Asia until the British demanded it in the late 18th century.  Previous to this Ivan Chai, a fermented black â€œteaâ€ was imported to Britain from Russia.  Ivan chai is made from the leaves of fireweed, known as Chamaenerion angustifolium in Europe or Epilobium angustifolium elsewhere.   Russian fireweed tea promoted longevity and health, with a smooth, sweet, floral flavor that green Chinese tea lacked.  Black tea, manufactured in India through the influence of the British East India Company, owed its oxidization and fermentation technology to Fireweed tea and the traditional fermentation method developed by the Russians, a thousand years ago. 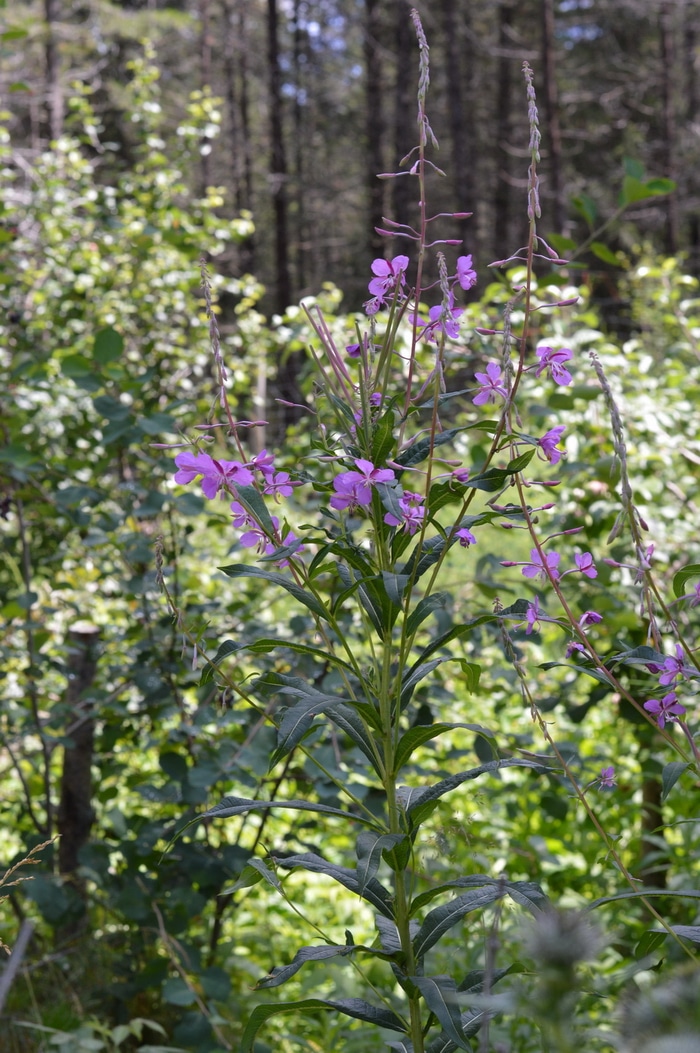 Fireweed grows up to 6 feet in height.  It reproduces by seed and by underground runners.  Youâ€™ll find it in disturbed sites, after forest fires, and in logged clearings.  Fireweed is a first colonizer plant that restores the soil and prepares the forest for regeneration, after a disturbance.  It grows throughout the Northern Hemisphere in zones 2 to 7 (USDA). In North America it is native in the west from California to Alaska, and in the east as far south as North Carolina and Tennessee.

Fireweed has been used safely as a tonic tea for hundreds of years in Siberia, Russia, and throughout Europe, both as a dried green leaf and as a fermented black tea beverage.  It is listed in the European pharmacopeia as a traditional treatment for prostate problems. It is considered safe through centuries of traditional use. 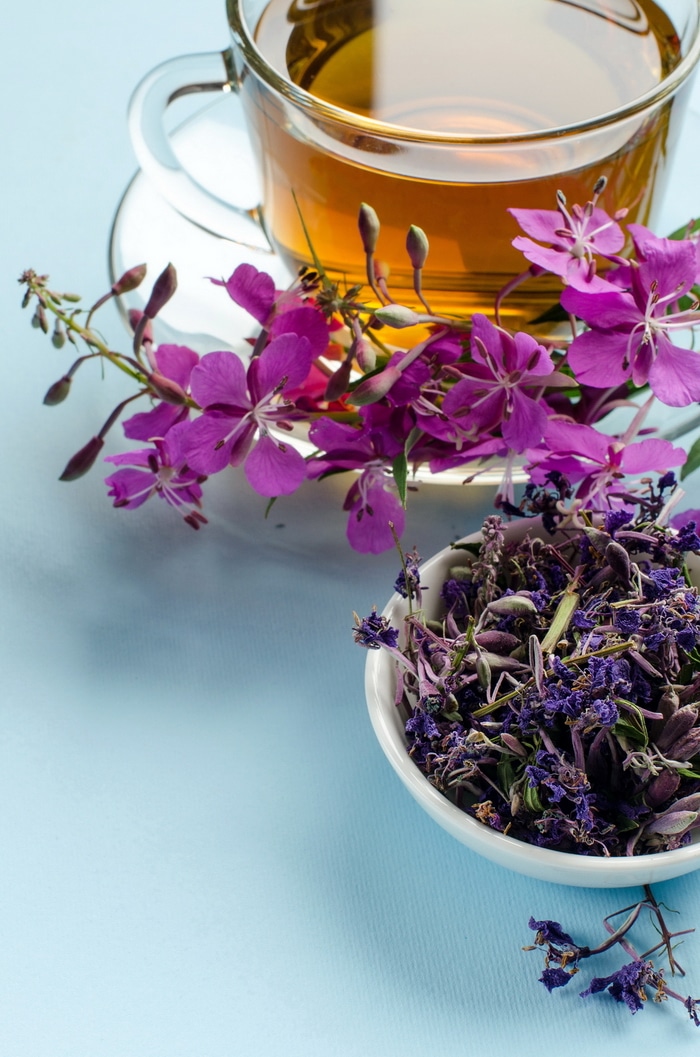 For centuries in Europe Russian Tea or Ivan Chai was THE tea of commerce.  Ivan chai is synonymous with fermented fireweed tea.  The Russians claim to have invented the process of tea fermentation.  Russian Tea offers several health benefits.

At the time of the Czars, Ivan Tea was exported to the rest of Europe.  It was Russiaâ€™s second highest export at its peak of popularity, second only to wheat.  In the mid-1800s trade with England was disrupted by the Crimean and Napoleonic wars. Commercial production of Ivan Chai stopped entirely after the October Revolution of 1917.  However, fireweed continued to be used as an herbal supplement in Russian homes. 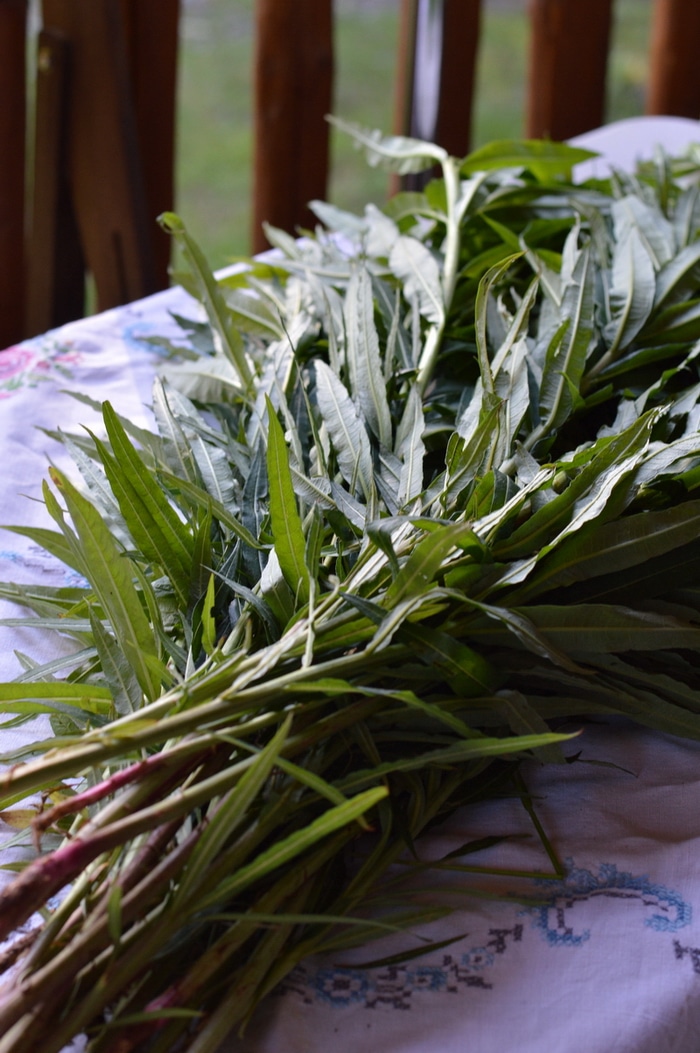 The 5 step DIY process to make Ivan tea from fireweed

To make Ivan tea fireweed leaves are bruised and fermented, in the same way that black tea is fermented, through an aerobic process.  After 2 or 3 days the fermentation is stopped with heat.  And the tea leaves are dried.

Tea fermentation is an aerobic enzymatic process rather than being dependent on microbes.  It is the same oxidative process that causes apples to turn brown and avocadoes to darken. It changes both the flavor of the leaf and the color.  The polyphenols in the tea leaves are transformed by polyphenol oxidases to turn the leaves brown to black, and change the flavor profile and aroma of the tea.  The fermentation process removes the acidic, freshly cut grass aroma, replacing it with a floral, fruity fragrance that is pleasant and flavorful. This enzymatic oxidization and fermentation alters the mouth feel of the tea, as well, softening its astringency and bitterness, while improving the aftertaste.

Fireweed leaves are harvested from plants either before flowering or during flowering, by plucking the leaves from the lower parts of the stock.  If the stock is not harvested the plant will continue to flower providing food for bees and insects.  However, the plants can also be removed from the ground.  The rhizome will remain in the ground to reproduce.  For more information about identifying fireweed in the wild see this post.

Leaves are stripped from the stems at harvest. Once the leaves are harvested they should be sorted and any damaged or diseased leaves removed from the pile. 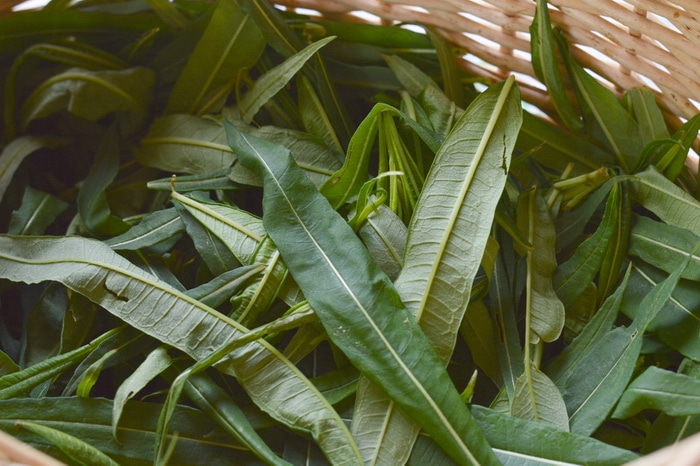 Place the leaves on a cotton sheet or in a shallow wicker basket to wilt.  The wilting process takes from 12 to 18 hours depending on the temperature.  The leaves are ready for rolling then they are dry enough to bend at the center vein without breaking.  Test a leaf by folding it over on itself before proceeding with step 3. 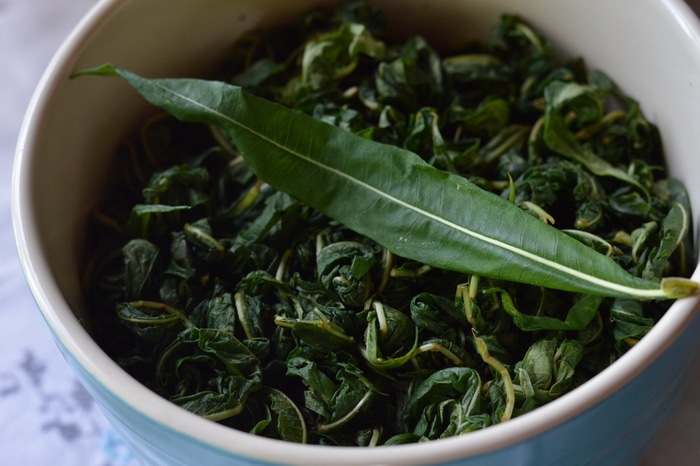 The rolling process breaks the leaf tissues and mixes the polyphenols in the leaves with the polyphenol oxidase enzymes.  Commercially large rollers are used to break the leaves.  However, traditionally, each leaf was individually bruised by rolling between the palms.  The rolled leaf holds its shape.  You can roll 4 or 5 leaves together to speed up the process.  Place the leaves in a bowl with an air tight lid to keep insects out during the fermentation.  The bowl should be loosely filled to allow for adequate oxidization. 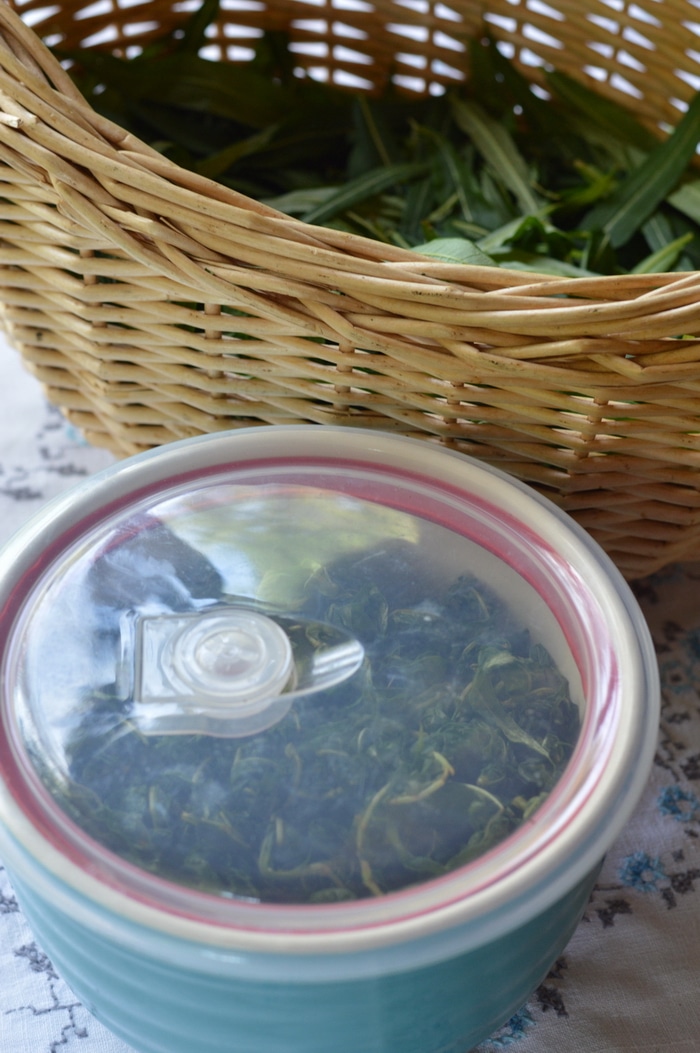 Tea leaves are fermented in an aerobic environment, but protected from off flavours and insect contamination for 24 to 72 hours, or longer.  A ceramic bowl with a lid is ideal.

Periodically stir the leaves during the oxidization process to evenly distribute the leaves in the bowl.

If you want to introduce addition flavors to the tea leaves you can add them at this stage.  Good candidates are aromatic jasmine flowers, fragrant rose petals, lemon verbena leaves, or peppermint or spearmint leaves. 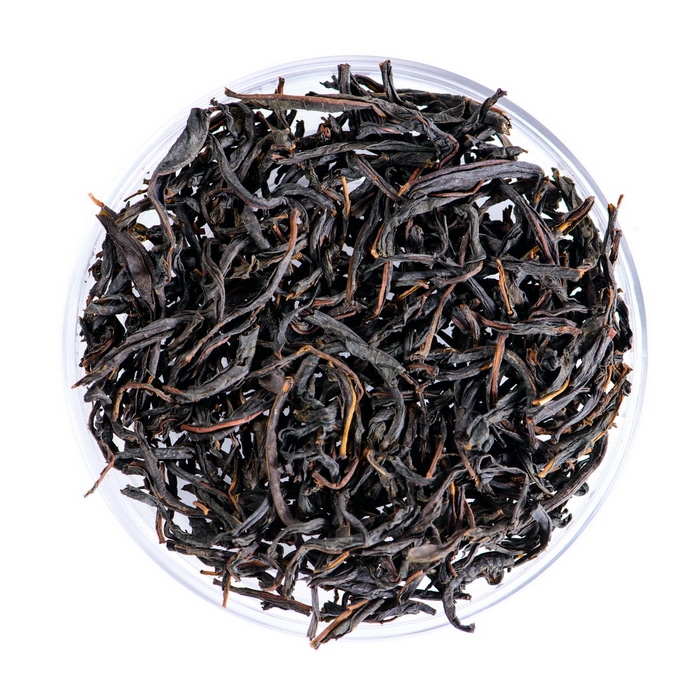 After 48 hours, check the fragrance and color of the leaves.  Stop the fermentation when the leaves are aromatic and fragrant and the color is dark brown or black. Depending on your temperatures this can take 2 to 5 days.  Just check them every 24 hours and stop the process when the leaves are at the stage of oxidization that you prefer.

Be sure to make notes along the way.  When you master the perfect combination of time and oxidization you’ll want to be able to repeat it.

You can brew a cup of tea from the leaves to test the flavour and aroma.  I find that the grassy scent is gone after 24 hours but other fragrances permeate the leaves some fruity and some floral.  Move to the next step, when the leaves have the flavour and scent you prefer.

Stop the oxidization when the fireweed leaves have the fragrance and color that you like.  You can test the tea by brewing a cup of it after 48 hour and after 60 hours, etc.   Generally a fermentation of 3 to 5 days is sufficient.

When the leaves are completely dry, bring the leaves to room temperature.  Package in airtight boxes or jars, and store in a cool dry place, where the jars are protected from heat and light.  Allow the tea to continue curing for 2 to 4 months before use, to mellow the flavor further.  The tea can be used immediately but the flavor will improve further if the tea is allowed to cure for several months. 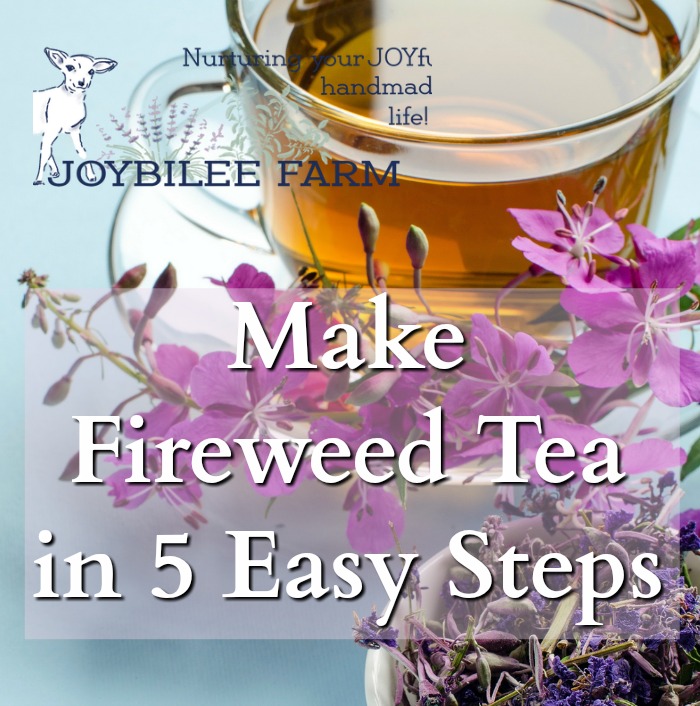 How to brew fireweed tea

Fireweed tea is caffeine-free with a many health benefits.

Check out the many health benefits of Fireweed as an herbal remedy here.