Are you a golden milk fanatic? Unless youâ€™ve been living under a rock, youâ€™ve likely seen the bright yellow turmeric tea drink photos on the internet or even in your favorite local coffee house.

I enjoy a good golden milk latte afternoon pick-me-up or late-night tea before bed a few times a week. I firmly believe in the power of ritual and think there is real magic in taking a few moments for yourself every day — and having a golden milk is one my favorite ways to savor a few minutes for yourself.

You may whip yourself up a homemade golden milk regularly, but did you know you can make your own batch of golden milk spice mix ahead of time?

I love mixing together this yellow turmeric tea mix and using throughout the week or even giving as gift to friends and family for holidays and birthdays.

Want the recipe for this great make-ahead 5-minute Golden Milk Spice Mix? Letâ€™s do it!

So, first things first, what is golden milk? While there are many golden milk recipes floating around, at their their core they contain ground turmeric as a base and usually also have cinnamon, coconut (sometimes in the form of coconut milk), and black pepper. Other recipes add more spices as well, including ginger, cardamom, and nutmeg.

I tested many different variations of this Golden Milk Spice Mix recipe before landing on what Iâ€™ve found to be the perfect blend, including:

Turmeric powder is the foundation of golden milk and is what gives it its bright yellow color. Turmeric is a root in the same family as ginger and galangal, and is grown in India and parts of Southern Asia. It is dried and ground into a powder, which is bright yellow in color and is often used in soups, stews, and — most notably — in curries.

Studies have shown that curcumin, the bioactive compound in turmeric, may have anti-inflammatory factors that may improve joint pain, skin irritation, and may even reduce the risk of heart disease. Ground turmeric, and golden milk in general, have long been used in ayurvedic medicine.

Ginger is a cousin of turmeric, and is a flowering perennial plant with a root that is used in cooking both raw and dried and ground into ginger powder.

Ginger is from the southern part of India and Asia, as has long been used to cure nausea and upset stomach, and some studies show that ginger creates a calming effect as consuming.

Cinnamon comes from the bark of the Cinnamomum tree species, which is grown in Southern Asia, specifically China and Indonesia. The bark is dried and then ground to produce ground cinnamon, which is commonly used in baked goods.

Like ginger, cinnamon has a long history of use as a digestive aid and some research suggests it may have anti-inflammatory and anti-bacterial properties.

Coconuts are a tropical fruit that come from the palm tree, and are used for their milk, flesh, oils, and even their shells. Coconut powder is made by draining coconut milk and drying coconut flesh, then grinding into a powder.

Coconut powder is great in curries, soups, and stews, and mixes well into hot liquids like golden milk. It adds a smooth tropical taste to golden milk.

Vanilla plants are actually orchids that grow on a vine and are harvest for their fruit, the vanilla â€œbeanâ€ pod that can be scraped to release its tiny black seeds.

Vanilla originated in Mexico, but is now grown across the world in tropical regions in places like Madagascar and Tahiti. Vanillas is most often used in baked goods, but itsâ€™ extract is also delicious in drinks like lattes.

Cardamom is a strong spices made from the small pods of the Zingiberaceae plant species, which is grown in India and Southern Asia.

It is used in both sweet and savory Asian cuisines, as well as more widely in baking. Cardamom contains antioxidants which may reduce inflammation and may have antibacterial effects.

Nutmeg is made from the ground seed of the Myristica tree, an evergreen tree found in Malaysia, Sri Lanka, and Indonesia. It is used in both sweet and savory dishes worldwide and is used in alternative medicine for pain relief and digestion.

Black pepper is the ground spice made from the peppercorn fruit from the Piperaceae plant, which is native to Southern India but is now also grown in Vietnam. It is now a staple spice used in cuisines throughout the world.

This simple spice mix recipe for golden milk is super easy to make and is ready in three easy steps:

Storing this spice blend is simple: store in an airtight jar or container in a cool dry place until needed. Because spices have a long shelf life, this can be kept for up to two or three years.

Spices donâ€™t necessarily go rancid, or bad, they just lose their flavor potency after time, so use your judgement on the flavor if theyâ€™ve been stored for awhile (it definitely wonâ€™t make you sick to eat spices past their due date, they just may not taste as good).

This Golden Milk Spice Mix can also be used in other foods as well: add it to your oatmeal, cookies, cakes, vegetables, curries, soups, stews, or even over meats like chicken or seafood. The possibilities are endless!

This simple spice mixture is as simple as mixing spices together, but there are a few tips and tricks I recommend to make sure you are buying ethical, sustainable, and fair trade spices:

Did you make this Golden Milk Spice Mix recipe? Leave a comment below and rate the recipe to let us know how it turned out. Save this latte recipe for later by pinning to your favorite winter Pinterest board and make sure to tag me on Fork in the Roadâ€™s Instagram to show me your golden milk creations! 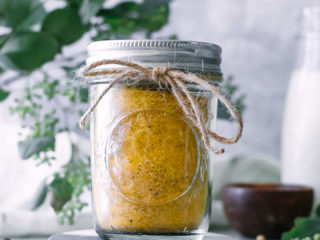