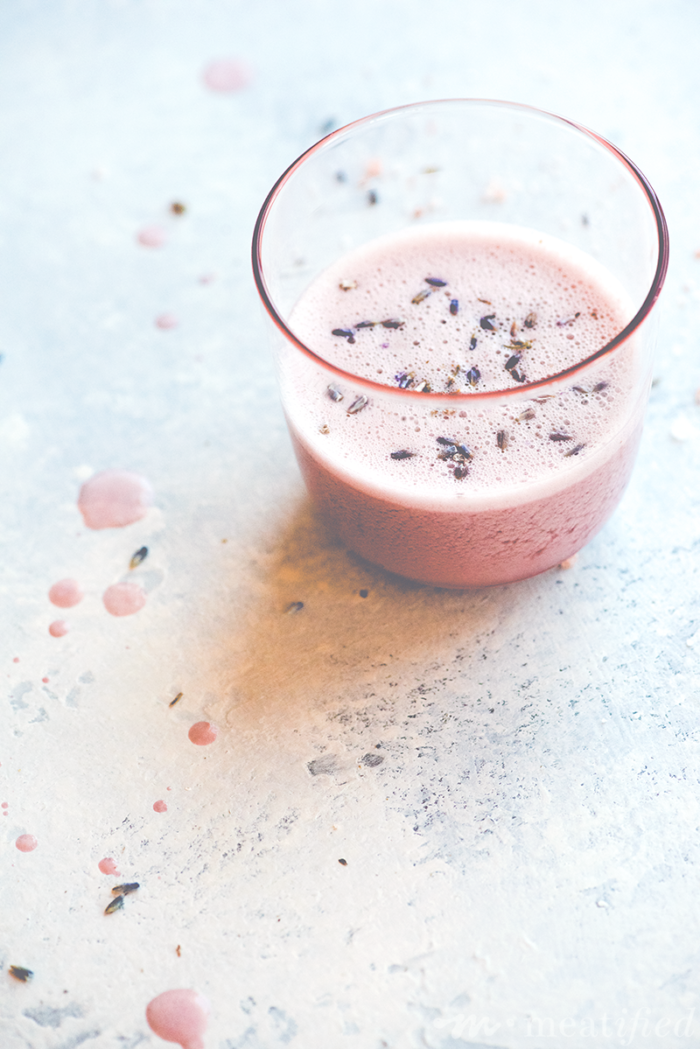 Let me get two things straight about this cherry lavender milk, immediately:

2) Yes, I know this is obnoxiously, Millennial Pink.

(The latter was not on purpose. But I will say that it’s accidentally pretty!) I will admit that I came up with this little beverage after Mr M. started drinking tart cherry juice in the evening before bed, but… moon milk is a bit too One With The Woo for me. I get it, but yeesh, the phrase itself makes me irrationally rage-filled. I can’t quite explain the aversion, but it’s strong & visceral, apparently.

Now, while I did call this a “night time” beverage, I’m not going to make some fantastical claims about the properties of tart cherry juice, which seem to veer online from “eh, it doesn’t do anything” to “it will immediately convert you into a sleeping machine that no longer feels pain!”. What I will say is that winding down with a mug of this soothing, calming and creamy beverage of an evening can’t a bad thing from the relaxing and stress reducing side of things. There’s something lovely about making yourself a little ritual on the way to sleepy land and a warm drink definitely helps my brain set the scene and start to realize that, yes, it’s gonna be time for bed soon. Now, whether that’s the mystical properties of tart cherries or the power of delicious tasting suggestion… is up to you!

Whipping up your own cup of night time cherry lavender milk is super simple. First off, you’re going to want to bring together some tart cherry juice with creamy coconut milk in a saucepan on the stove top. When it comes to picking out the tart cherry juice, I like to use one that hasn’t been cut with other juices if at all possible, for max cherry flavor and best bang for your buck, too. They’re often sweetened and / or cut with apple juice, but ideally you just want straight up Montmorency cherry juice.

(Often, the only way to buy that no-bs-added 100% juice is in large, glass bottles. If you’re not going to be drinking up cherry lavender milk on the regular, you can freeze the juice in portions or cubes in the freezer nicely.) You’ll also want to pick out some culinary, edible lavender flower buds for this. I like to add these into the mix for an added element of relaxation. The lavender flavor is subtle, but there’s something very soothing about the scent. (Which I find hilarious, because up until recently I was a lifetime member of the I Hate Lavender Club. Turns out, I really just hate faux lavender scents.)

While we bring the cherry and coconut blend to an almost boil, the lavender sits in the mix and steeps. I like to turn off the heat, cover the pan and give the lavender some extra time to infuse all its goodness into the drink. After that, I like to bring the cherry lavender milk back to an almost boil so that it’s nice and warm, then stir in a smidge of raw honey, a pinch of salt and a whiff of vanilla bean powder. That’s it! If you like your bedtime drinks with a nostalgic hint of frothy goodness on top, you can throw the drink in the blender or give it a good whirl with a little milk frother just before settling down to sip on your sleepy time cherry lavender milk. Plot twist: it’s also great over ice! Next Post
The Most Refreshing Mixed Berry Iced Tea